Development and Psychometric Evaluation of the Interpersonal Sexual Objectification Scale 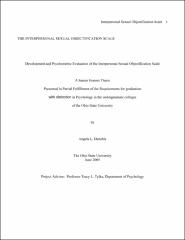 Except where otherwise noted, this item's license is described as Attribution-NonCommercial 2.5 Generic