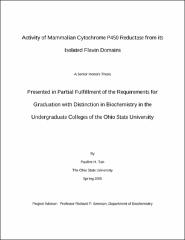 The goal of this project was to purify the isolated FAD domain from rat cytochrome P450 reductase and to study its electron transferase activities, either alone or in combination with added isolated FMN domains from various sources. The rat FAD domain was purified by affinity chromatography on immobilized 2’,5’-adenosine diphosphate. The purified FAD domain was observed to retain the NADPH-dependent ferricyanide reductase activity exhibited by the intact reductase indicating that its electron transferase activity remains intact. Cytochrome c (an analog for cytochrome P450) reductase activity similar to the intact enzyme could be reconstituted by mixing the isolated rat FAD and FMN domains in vitro; however, evidence for a stable 1:1 complex was not obtained. Instead, the activity was linearly dependent on the ratio of the FMN:FAD domains suggesting an alternate electron transfer mechanism. The rat FAD domain was mixed with homologous FMN-binding domains/proteins from other sources to study the flavin domain specificity. Cyctochrome c reductase activity can not be reconstituted using the structurally homologous flavodoxin; however, somewhat surprisingly, higher levels of activity were obtained using the FMN domain from a related bacterial cytochrome P450 system which displays different redox properties. Cytochrome c reductase activity was inhibited at high concentrations of the cytochrome in both the bacterial and rat cytochrome P450 reductase. The mechanism of inhibition is not fully understood but appears to be the result of the formation of a relatively stable complex with the FMN-binding domain. These data support a mechanism for cytochrome reduction involving a requisite movement of the flavin domains in the intact cytochrome P450 reductase enzyme and the formation of a complex with the cytochrome.