A proposed stratigraphic package for filling a mid-Proterozoic rift basin under the Bellefontaine Outlier area, Ohio, and the consequences of the rift on the formation of the Outlier 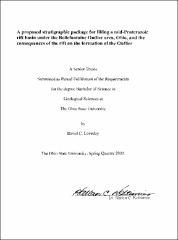 The discovery of a mid-Proterozoic rift basin in the crystalline basement rocks under the Bellefontaine Outlier area, Ohio has had a number of consequences on our understanding of Precambrian tectonics and stratigraphy of western Ohio and the northcentral North American midcontinent. In this study, a new stratigraphic package has been proposed to fill the ancient rift basin and a geolbgical history of the area from the mid-Proterozoic to the Devonian, has been synthesized to study the consequences of this deep basement feature through time. Three new proposed rift basin-filling volcanic and sedimentary units encode the development, maturation, and termination of the rift. A fourth proposed sedimentary unit, lying above the basin-filling sequence, documents the initial changes of the region to a massive foreland basin in front of newly developed Grenvillian thrust sheets during the late-Proterozoic. The lower contact of the Middle Run Formation has also been extended to a much greater depth overlying the fourth proposed unit and represents welldeveloped foreland basin sediments. Another goal of this study considers tectonic events from the mid-Proterozoic initiation of rifting through the Devonian Acadian Orogeny, to explain the development and incomplete Paleozoic stratigraphy of the Bellefontaine Outlier. Compressive forces associated with the Grenville Orogeny may have propagated the rift-defining fault complexes up through the overlying late-Proterozoic strata and imposed significant structural weaknesses that could be exploited by the compressive forces of the Devonian Acadian Orogeny. During the Acadian, the Outlier block may have been exhumed by the reactivated faults and the Devonian Delaware Limestone and Olentangy Shale units, not present within the Outlier block, may have been syntectonically deposited in flanking basins during the exhumation.