A quantitative study of Crinoid columns from the Waldron Shale (Silurian), Waldron, Indiana 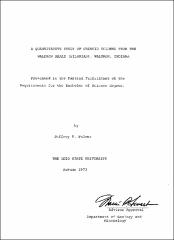 Crinoid columnal fragments were collected in bulk from the Waldron Shale (Silurian), in a quarry near Waldron, Indiana. Measurements were taken from these columnal fragments and plotted on graphs. It was hoped to determine different groups of crinoids from these graphs. However, predetermined groups were set up on the bases of physical characteristics. The graphs are used to compare these groups with each other. Five separate groups were determined from the specimens collected. Slight variations in these groups are noted and subgroups or types are suggested.