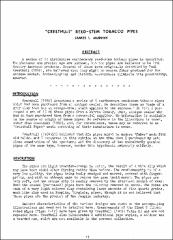 A series of 17 distinctive earthenware reed-stem tobacco pipes is described. Manufacturer and precise age are unknown but the pipes are believed to be 19th C. American products. Several of these were originally described by Paul Cresthull (1969), who believed they might be modern fakes made for the antique market. Archaeological and historic occurrences eliminate this possibility, however.