Discharge of the Congo River Estimated from Satellite Measurements 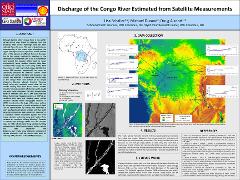 Although Central Africa’s Congo River is the world’s second largest river based on drainage area and discharge; little in-situ hydrologic data has been collected from this area. This lack of data limits our understanding of the water cycle throughout the region. The region receives significant rainfall on both sides of the equator at different times of the year, due to the annual south-north migration of the Intertropical Convergence Zone (ITCZ, a low-pressure zone around the equator which leads to heavy precipitation). Many satellite missions have been launched that image the earth using visible band frequencies or radar technologies (e.g., LandSat and various SAR missions, respectively), but none are specifically designed to measure surface water variables such as river discharge and changes in lake storage. Our objective is to determine the discharge of the Congo River and several of its largest tributaries (Sangha, Ubangi, Aruwimi, Tshuapa, Kasai), using only remotely sensed data. We use remote sensing data from these various satellite missions for measurements of channel width, length and water surface elevation. Data sets showing open water in channels (the JERS-1 SAR data from the Global Rain Forest Mapping project, or GRFM) are combined with data sets showing water surface elevation (Shuttle Radar Topography Mission, or SRTM) to determine the slope of the water surface. By using measurements of width, estimates of depth can be approximated by noting that discharge in short reaches should remain constant and thus width variations can indicate depth variations. Manning’s n is estimated within reasonable bounds for rivers having cohesive sediments along their banks. These variables are combined utilizing Manning’s Equation to estimate the discharge of the river. We calculate slope for 100's of kilometer long reaches by fitting polynomials to SRTM derived water surface heights and their respective flow distances. Our results show discharge variations of various tributaries and the Congo main stem for February 2000, the time of the SRTM overpasses.