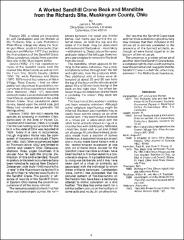 A worked (cut and drilled) beak and mandible from a Sandhill Crane (Grus canadensis tabida) are described from a refuse pit excavated at the Late Prehistoric Richards Site, Muskingum Co., Ohio. This is the first record of the bird in Muskingum Co. and only the fourth prehistoric record for the species in Ohio. Other bone artifacts found in the refuse pit include a drilled elk phalange, an antler tine with chisel edge, a bird bone bead, and a bipointed pin or awl. These are also illustrated.