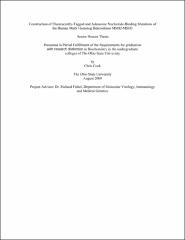 DNA mismatch repair (MMR) is a highly conserved system for correcting mispaired nucleotides arising from misincorporation errors during DNA replication, genetic recombination, and chemical or physical damage. The MutS homologues (MSH) and MutL homologues (MLH/PMS) are the fundamental components of MMR and are conserved from bacteria to humans. The MSH proteins initiate MMR via mismatch legion recognition. One human MSH complex in particular, hMSH2-hMSH3, recognizes small insertion deletion loops (IDL) and repetitive DNA sequences. Inherited mutations in many MMR genes including hMSH2 lead to a predisposition for colorectal cancer (hereditary non-polyposis colorectal cancer, HNPCC). Also, the hMSH2-hMSH3 complex has been implicated in the expansion of tri-nucleotide repeats in disorders such as Huntington’s disease and myotonic dystrophy. The role hMSH2-hMSH3 plays in this expansion remains enigmatic. Two mutations made to the Walker A nucleotide binding domain of hMSH2 and hMSH3 will allow for a detailed study of the mechanics of this complex in recognizing and binding DNA lesions, as well as the signaling of downstream MMR components. A detailed study of the conformational changes the protein undergoes in lesion recognition will also be possible via fluorescently tagged MSH2 and MSH3 subunits for use in fluorescence resonance energy transfer.