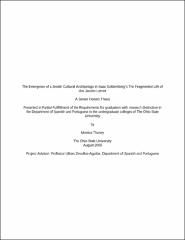 The objective of this study is to investigate the Jewish immigrant imaginary in Peru during the 1920’s and 30’s through Isaac Goldemberg’s novel, The Fragmented Life of don Jacobo Lerner (1976). The story revolves around Jacobo, a Russian Jew living in Peru, trying to piece together his life the night before he dies. The story recounts the major events of his twelve years in Peru through various newspaper clippings, historical events, cultural announcements and testimonies of his family and friends, including the disturbing words of his illegitimate son, Efraín. I attempt to make sense of this fragmented narrative and its wide-ranging implications on Jewish identity by construing a cultural archipelago that stretches from Israel to Russia to Europe and finally, Peru. This construction defends the multiplicity of the story’s characters, all linked together by Jacobo, the story’s protagonist and anti-hero of sorts; an overall representation of the transcendental Wandering Jew. With this analysis I will try to make the Jewish cultural archipelago an explanatory metaphor rather than a puzzling one. Geographically, an archipelago is a group of scattered islands; in this case helps to explain qualities related to a Diaspora, on cultural resistance, and on the dynamics of Jewish culture from the places they leave to the places they settle. Aside from the story, to further extend my thesis I have read several other scholarly texts that either critique Goldemberg’s The Fragmented Life of don Jacobo Lerner or deal with Jewish immigrant life in Latin America. Altogether, I believe my conclusions coincide with my initial theory that indeed there is evidence of a unique Jewish cultural archipelago and that this small Jewish community in Peru is imperative in understanding the social dynamics of Jews in a transnational framework. It is with Goldemberg’s distinctive interpretation of Jewish identity in Latin America that upholds the backbone to portray the universality and complexity of socio-cultural isolation, integration and assimilation that still maintain the bridges to unite several worlds.

Graduation with research distinction in Spanish