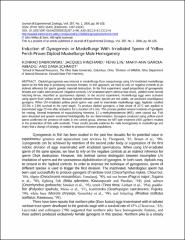 Diploid gynogenesis was induced in muskellunge Esox masquinongy using UV-irradiated muskellunge sperm as the first step in producing monosex females. In this approach, we have to rely on negative controls as an indirect reference for sperm genetic material destruction. In the first experiment, equal proportions of gynogenetic females and males were produced. Negative controls, UV-irradiated sperm without heat shock, yielded some normal hatching larvae, described as spontaneous diploids. In the second experiment, muskellunge eggs were activated using sperm from yellow perch. Because hybrids between these species are not viable, we produced unambiguous gynogens. When UV-irradiated yellow perch sperm was used to inseminate muskellunge eggs, haploids resulted (22.5% ± 2.8% survival to the eyed stage). To produce diploid gynogens, a heat shock of 31°C was applied to inseminated eggs 20 min after activation for a duration of 6 min. This process yielded several hundreds of gynogens for rearing. Several treatments of masculinizing hormone, 17 α-methyltestosterone (MT), were carried out. Fish were dissected and gonads examined histologically for sex determination. Gynogens produced using yellow-perch sperm confirmed the presence of males in the control group, whereas the MT bath treatment (400 μg/liter) resulted in the production of fish with ovotestis. These results provide evidence for male homogamety in muskellunge and imply that a change of strategy is needed to produce monosex populations.

Funding for this project was provided by the Federal Aid in Sport Fish Restoration Program (F-69-P, Fish Management in Ohio), administered jointly by the U.S. Fish and Wildlife Service and the Ohio Division of Wildlife.