A Closer Look at an Effigy Pipe from near Trinway, Muskingum County, Ohio 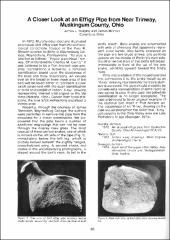 An unusual engraved bird effigy pipe made of sandstone and reportedly found in the vicinity of Trinway, Muskingum Co., Ohio, is described and illustrated. On the basis its large size and the presence of an engraved "x-ray drawing" under the bird's beak,the pipe is considered to be Late Prehistoric in age. Two incised snakes also adorn the pipe, which is in the collections of Waynesburg College, Waynesburg, Pennsylvania.