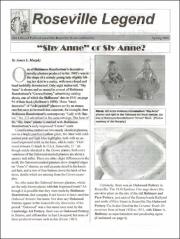 Planters nearly identical to Robinson-Ransbottom's "Shy Anne" product, which can be dated to ca. 1941, are impressed with an "Oakwood Artware" mark. Although also impressed "Zanesville, O.," these may be a product of the Oakwood Pottery Co. listed in Roseville from at least 1928 to 1933 and operated by Elmer A. Baldoser. It is also possible they were manufactured by Robinson-Ransbottom for the Oakwood Pottery Co.