Structural analysis of crustal shortening amounts of the Bolivian Subandes 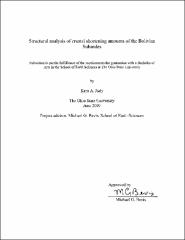 This paper presents an evaluation of multiple models for crustal shortening of the Bolivian Subandean zone. These models are cross-sections created to justify estimations of crustal shortening in the region. The differences in cross-section interpretation allow for a range of crustal shortening estimates. Though differing opinions on the exact amounts of shortening are offered, the consensus among the studies agrees that the greatest amounts are found in the central Subandean zone, located at approximately 17-18 degrees south, with lesser amounts in the northern and southern sections of the SAZ. Differences in models can be attributed to the inclusion of proposed basement structure (various hypotheses have been documented), and interpretations of sub-surface folding and faulting. The various basement structures proposed have direct impact on structure and topography of the zones of the Andean cordillera, leading to debates on the labeling of such zones. Different constraints on the timing of initiation of shortening are also proposed.