Vertebrate Remains from the Richards and Philo II Sites 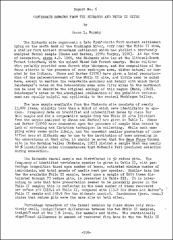 James L. Murphy, "Vertebrate Remains from the Richards and Philo II Sites," pp. 100-126 in The Richards Site and the Philo Phase of the Fort Ancient Tradition, ed. by Jeff Carskadden and James Morton. Zanesville, Ohio, The Survey.

Prehistoric faunal samples from two Fort Ancient Philo Phase village sites along the Muskingum River, Muskingum Co., Ohio, are described and analyzed. The two sites represent virtually identical food economies, typical Late Prehistoric maize/hunting focal economies in which maize agriculture was supplemented by deer and turkey hunting, particularly during early autumn. Habitation of both sites clearly was year round, and all local ecological niches were utilized, although little use appears to have been made of the upland oak forests and much less emphasis was placed on the littoral and riverine niches than might be expected.