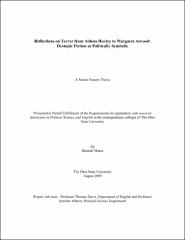 This thesis takes into account Frederic Jameson’s theory in The Political Unconscious that narratives are indeed socially symbolic and can, therefore, reveal significant information about the time period in which that narrative was created. I agree with his claims, and similar claims from other studiers of dystopian literature (Tom Moylan), that dystopian literature reveals important information about its historical moment; however, I prove in my thesis that dystopian literature as a genre, over time, reveals shifts in ideas of political terror. In order to make this claim, I study what I refer to as “First Wave" dystopic fiction, which is dystopic fiction written after the World Wars and through the Cold War, and contrast their narrative forms with “Second Wave" dystopic fiction, which is Post-Communist fiction. In my reading, the narratives of First Wave dystopic fiction reveal political terror as concentrated in the totalitarian, monolithic state that poses a threat to the existence of the individual. The narrative changes that mark the post Communist, Second Wave of dystopic fiction reveal a shift in the form that political terror takes by demonstrating the fear of an inept state that is too weak to protect its citizens from non-state terrors like disease, genetics, terrorist attacks, and economic failure, among others.