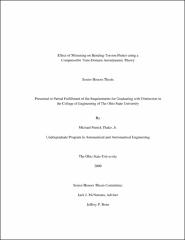 The aircraft engine is a key element in improving overall performance of both military and civil aircraft. As designers look to improve performance, turbomachinery aeroelasticity, i.e. the study of fluid-structure interactions in compressors, is an important consideration when designing an efficient and reliable aircraft engine. Compressor designers are concerned with these interactions because there is a potential for structural failures due to flow-induced vibrations such as flutter. Flutter is a nearly instantaneous self-excited response that typically results in total structural failure. Because flutter poses as a sudden threat to aircraft safety, it is the center of this investigation. A method known as blade mistuning is tested to determine if it is a viable approach to reducing the occurrence of flutter. Mistuning is small deviations between blade stiffness and mass caused by manufacturing tolerances and wear. The effect of mistuned compressor blades on flutter has been studied over the past few decades and research has shown that a small amount of mistuning may have a beneficial effect on flutter velocity and could be used as a passive control method. The following investigation makes use of a recently developed unsteady aerodynamic model, based on the vortex lattice method, which is a discrete time-domain compressible flow solver applied to a two-dimensional, variable geometry cascade. The vortex lattice method is coupled with a typical section cascade structural model to form a set of aeroelastic equations of motion. These equations of motion include the effects of mistuning by deviating pitching frequency. A Runge-Kutta integration scheme is implemented to solve the equations of motion. One method of calculating the flutter velocity and stability of a blade is by tracking damping. In this case, damping of the aeroelastic transient response is identified using a least-squares curve-fitting method. Damping of the response indicates system stability, where flutter is unstable, diverging oscillations. Results for this method are generated for two different cases. The first case is a twelve-blade cascade in a Mach 0.3 flow where alternate blade pitching frequency mistuning is studied with mistuning values of 0, 1, and 2%. Case two is a twenty-blade cascade in an incompressible flow where alternate blade pitching frequency mistuning is studied at values of 0, 1, 2 and 5% mistuning, as well as a case of random mistuning. The results show that mistuning introduces an exchange of energy between blades which improves the flutter velocity for a few blades in certain regions, but no drastic increase in flutter velocity was noted due to mistuning. Advisor: Jack J. McNamara, Ph.D.