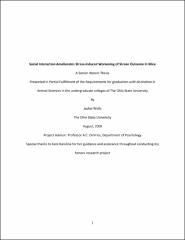 Stress and social environment have been recently identified as important risk factors for stroke. Specifically, both stress and social isolation exacerbate stroke outcome through a mechanism that may involve the hypothalamic‐pituitary‐adrenal (HPA) axis. Conversely, affiliative social interactions have been shown to improve stroke outcome. The goal of the current study was two‐fold: 1) to identify the mechanism by which social interactions modulate stroke outcome and 2) to determine whether social interactions provide a buffer against stressinduced exacerbation of stroke outcome. For this study, we used middle cerebral artery occlusion (MCAO) or SHAM surgery in mice to induce stroke. Male C57/bl6 mice were housed individually or paired with an ovariectomized female for two weeks prior to stroke and throughout the three day post‐stroke recovery period. Mice in both housing conditions were assigned to stress (restraint) or non‐stress conditions. Baseline and post‐surgical behavioral testing was conducted on all animals. Our data indicate that following stroke, non‐stressed, socially isolated mice showed a significant increase in infarct volume compared to pair‐housed mice. However, among stressed mice, infarct volume did not differ by housing conditions. Analysis of behavioral testing indicated that following stress, socially isolated mice had significant functional deficits relative to all other groups tested. However, stressed pairhoused mice showed significant improvements in functional recovery and several behavioral measures after stroke indicating that post‐stroke behavior among this group returned to baseline levels. The mechanism by which social interactions influence behavioral measures in the absence of differences in infarct volumes is currently under investigation. Taken together, these data show that 1) social interaction influences stroke outcome and 2) social interaction 3 buffers mice against stress‐induced exacerbation of post‐stroke functional deficits. We have begun to examine whether oxytocin, a peptide released during affiliative social interaction in several species, may underlie the neuroprotection provided by pair housing.