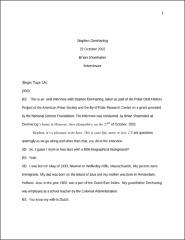 Summary of Contents: Stephen DenHartog (Denny) first went to Antarctica in late 1957. He and Buck Wilson sailed from San Diego aboard the USS Burton Island and rode the vessel all the way to McMurdo with a short stop in New Zealand. From McMurdo they rode the USNS Nespelen a tanker to Little America V (LAV). In January 1958. From LAV he flew out and joined the Ross Ice Shelf Traverse under Bert Crary, senior scientist for the Antarctic IGY program, and relieved Bill Cromie as glaciologist. Later he conducted glaciological observations out to Mile 160 along the “Byrd Station Highway.” He was with Bert Crary when the ice front by Little America crumbled taking Bert with it. He ran back and alerted the camp – eventually saving Crary’s life. During the winter he and Crary conducted oceanographic research from the sea-ice on Kainan Bay. After the winter of 1958 he participated in the Victoria Land Traverse from LAV across the Ross Ice Shelf, up the Skeleton Glacier to the Antarctic Plateau to 81degrees South and 132 degrees East and thence to McMurdo Station. In 1961 Denny traveled to Barrow Alaska and thence to Arctic Research Lab Ice Station II (ARLIS II) on a tabular iceberg in the Arctic Ocean. In 1962 he returned to McMurdo for gravity survey work. In the spring months of 1962 thru 65 he completed gravity surveys from Cessna 180 aircraft flying from Point Barrow, AK. In 1969 Denny rode the SS Manhattan from Point Barrow to Halifax to assess its icebreaking capability. In 1970 he returned on the ship to the Arctic, again to test the icebreaking ability. The purpose of these tests was to gain data for building large icebreaking tankers as an alternative to the proposed Alyeska Pipeline. From 1970 to 1992 he worked for the Cold Regions Research and Engineering Laboratory in Hanover, NH. His specialty was to study river and lake ice. While there he also worked on the blue ice runway project with Charles Swithenbank and Malcom Mellor.