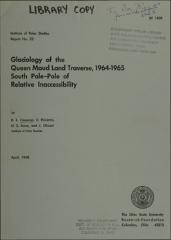 An oversnow traverse was made from the South Pole to the Pole of Relative Inaccessibility along a zigzag path of about 800 nautical miles during the period 4 December 1964 to 27 January 1965. The surface varied from very hard with many highly developed sastrugi to very soft and smooth. The average air temperature was -28.8°C, with an absolute maximum of -l8.2°C on 5 January and an absolute minimum of -44.7°C on 26 January. The absolute maximum wind speed recorded was 9.0 m/s on 29 December and 17 January; there was 3 percent calm in December and 1 percent calm in January. Solar halos were frequent. Firn temperatures were taken at 29 sites; the most striking anomaly occurred on the last leg of the traverse where there was an abrupt change in slope and as the height increased the temperature anomalously increased before decreasing as expected. The temperature profile at the Pole of Inaccessibility was similar to that obtained by the Soviets in 1964. Temperature gradients were negative at the South Pole but strikingly positive in the vicinity of the Pole of Inaccessibility. Density profiles to depths of 40 m were taken at 12 sites with a neutron-scattering device; most of the density curves showed a break at a density of 0.52 to 0.54 g/cm3. Snow accumulation studies in pits showed an accumulation generally between 5 and 10g/cm2. Snow accumulation measured at the anemometer mast and the instrument shelter at the Pole of Inaccessibility for the period 14 December 1958 to 30 January 1965 was 3-6 g/cm2/yr.