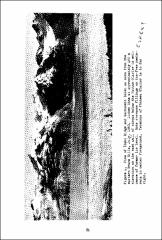 Structures on the Burroughs Glacier, southeast Alaska, were investigated during the summers of 1959 and 1960 by personnel of the Institute of Polar Studies and the Geology Department, The Ohio State University. The objective was to determine the characteristics and origin of structures and related fabric in ice that was once 300 to 400 m beneath glaciers of the Little Ice Age. The present glacier (14 x 3 km) is cut off from any ice source and is entirely below the firn line. Between 1948 and 1960 the ice surface dropped at the rate of 0.8 m per year at 500 m elevation and 6.8 m per year at 175 m elevation near the terminus. Ice movement during an 11 month period varied between 6.7 m and 0.5 m. Three general kinds of ice were identified at the glacier surface: foliated ice, coarse-grained border ice, and very coarse-grained basal ice. Two systems of fine-grained foliation are present: a steeply dipping system of persistent longitudinal orientation and a gently dipping system having a regional trough-like structure. Longitudinal foliation is caused primarily by faster flow of the ice at the centerline than at the margins, and faster flow at the surface than at the bottom, which produces differential movement and recrystallization along closely spaced layers. The trough-like structures were either inherited from foliation which occurred along former stratification planes near the ice source above the Cushing Glacier, or from foliation which occurred along spoon-shaped shear surfaces near the same ice source. The structures subsequently were drawn out by ice flow over a great distance through the Cushing Valley. The optic orientation of 800 crystals in the foliated ice of the eastern tongue 600 m from the terminus was measured. A triple maxima fabric (five to six per cent concentration per one per cent area) is present in the coarse ice and a single maximum (six per cent concentration), in the fine ice. The fine ice maximum is normal to the gently dipping foliation plane and corresponds with one maximum in the coarse ice. The latter may be a relic of the fine ice fabric after grain enlargement. Other maxima in coarse ice are oriented close to the pole; of principal fracture planes, suggesting that the stresses which brought about fracturing near the surface also produced recrystallization just below the rupture zone. A triple maxima fabric, measured from 200 grains in the coarse ice, may have formed either by shear near the glacier bottom or along gently dipping foliation planes which are farther from the terminus. This fabric resembles a three-maxima pattern obtained by Steinemann in torsion shear experiments. Coarse ice grain size decreases linearly with distance from the terminus. The rate of decrease levels off rapidly in the vicinity of the foliated ice contact, and probably marks the boundary between active and stagnant ice. Structural evidence suggests that ice flow during the early stage of the Little Ice Age was from west to east through the Burroughs Valley and, during waning stages of ice advance, to the east and west from an ice crest in the upper Burroughs Glacier. Structures produced by present movement have been superimposed on older structures produced at depths of 300 m or more.

This report was submitted by Richard P. Goldthwait to the National Science Foundation.
The University Archives has determined that this item is of continuing value to OSU's history.