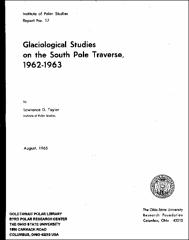 Glaciological observations were made at 25 stations along a 1448 km over-snow traverse between the South Pole and the Queen Maud Mountains during the austral summer, 1962-63. Annual accumulation was determined from pit studies by the distribution of impermeable crusts, revealed by ink-staining pit walls, and the fluctuations in density of firn to a depth of 2 m. Climatological data indicates that impermeable crusts rarely form during winter. Stratification is complicated by disconformities, a break in the normal sequence of layering due to absence of one or more years of accumulation. Accumulation varies from 6.8 gm/cm2 at the Pole to 10.8 gm/cm2 near the Queen Maud Mountains. Annual accumulation, mean density between 0 and 2 m, integrated ram hardness, and 10 m temperatures in firn all decrease with increasing latitude between 87°08'S and 90°S as follows: accumulation, 1.2 gm/cm/degree latitude; density, 0.037 gm/cm3/degree latitude; integrated ram hardness, 1160 joules/degree latitude; and 10 m temperature, 1.5°C/degree latitude. Ten m temperatures in firn near the Pole indicate a lapse rate of -0.8°c per 100 m. At depths between 15 and 40 m, negative temperature gradients of 0.56 to 0.64°c per 100 m depth were recorded with largest gradients near the Pole. There is some indication that ice flow may be responsible for the gradient change. Annual accumulation, 10 m temperature, and mean density of firn (0-2 m) plotted against each other have linear correlations of 0.94. The regression lines of these plots may be used to determine any two of the values if the third is known within the region of the traverse.