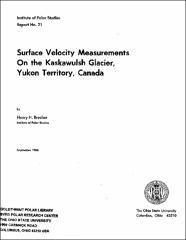 Positions of 24 markers on the upper north arm of the Kaskawulsh Glacier were determined by intersection or resection on five occasions between July 12 and August 14, 1964. Surface velocities over four time periods of several days and two two-week periods were computed from the position determinations and compared to mean seasonal velocities. It was found that differences from mean seasonal values are randomly distributed. Annual velocities of three markers along the glacier centerline appear to be very slightly larger than summer velocities. An analysis of the errors in the results indicates that the errors in velocity differences are generally about as large as the apparent differences. It is concluded that there are no significant differences from mean seasonal velocities over the short time intervals.