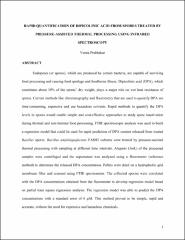 Endopores (or spores), which are produced by certain bacteria, are capable of surviving food processing and causing food spoilage and foodborne illness. Dipicolinic acid (DPA), which constitutes about 10% of the spores’ dry weight, plays a major role on wet heat resistance of spores. Current methods like chromatography and fluorometry that are used to quantify DPA are time-consuming, expensive and use hazardous solvents. Rapid methods to quantify the DPA levels in spores would enable simple and cost-effective approaches to study spore inactivation during thermal and non-thermal food processing. FTIR spectroscopic analysis was used to build a regression model that could be used for rapid prediction of DPA content released from treated Bacillus spores. Bacillus amyloliquefaciens FAD82 cultures were treated by pressure-assisted thermal processing with sampling at different time intervals. Aliquots (1mL) of the processed samples were centrifuged and the supernatant was analyzed using a fluorometer (reference method) to determine the released DPA concentration. Pellets were dried on a hydrophobic grid membrane filter and scanned using FTIR spectrometer. The collected spectra were correlated with the DPA concentrations obtained from the fluorometer to develop regression model based on partial least square regression analysis. The regression model was able to predict the DPA concentrations with a standard error of 6 µM. This method proved to be simple, rapid and accurate, without the need for expensive and hazardous chemicals.