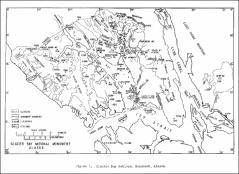 Muir Inlet is in the northeast part of Glacier Bay National Monument in Southeastern Alaska, about 135 kilometers northeast of Juneau. Muir Inlet is part of a large dendritic glacial valley system that has three tidal glaciers. It is flanked on the east, north and west by peaks of the St. Elias Mountains, with maximum elevations of about 2,200 meters. To the south, Muir Inlet is joined by Wachusett and Adams Inlets before it joins Glacier Bay. The region has a maritime climate with cool summers and mild winters. Glaciers in this part of Glacier Bay Monument are downwasting and retreating rapidly, and vegetation is reestablishing itself on the deglaciated areas. The stratigraphy in Muir Inlet can be divided into six units. From oldest to youngest they are: (1) The Forest Creek Formation, which is marine clay, silt and sand with abundant marine fossils. Radiocarbon dating of shell material indicates a minimum age of 10,000 ± 220 years B.P. (2) The Muir Till is the lower, more weathered and indurated of two tills in the section. Wood at the interface between the Forest Creek Formation and Muir Till is 10,400 ± 260 years old. This gives a maximum age for Late Wisconsin ice advance in Muir Inlet. (3) The Van Horn Formation is composed of three members: a lower gravel, a middle lacustrine member, and an upper gravel. The Van Horn Formation was deposited during the interval from Late Wisconsin ice retreat to the beginning of the Neoglacial advance. Interstadial time lasted about 5,000 years, as determined by the dates of trees in place in this formation. Lake sediments accumulated from about 4,500 years B.P. to about 2,500 years B.P. Late interstadial gravels cover most lake deposits. (4) The Glacier Bay Till is the upper, relatively unweathered of the two tills in the section. Wood in place that is covered by this till has been used todate the Neoglacial ice advance in the Muir Inlet area. Ice moved westward down Wachusett Inlet and reached the base of the Curtis Hills 2,735 ± 160 years B.P., and ice had thickened and covered the lower two-thirds of White Thunder Ridge near the head of Muir Inlet, 2,120 ± 115 years B.P. Neoglacial ice may have started advancing as early as 3,000 years ago. Ice may have started retreating from a terminal moraine at Bartlett Cove in the late 1600's or early 1700's. By 1794, it was retreating north of Bartlett Cove. Since then, it has retreated at least 70 km to its present terminus in Muir Inlet. The recession from Icy Strait up Glacier Bay, about 100 km, is the greatest observed anywhere in the world. Trees are re-establishing themselves on the deglaciated terrain and the arms of Muir Inlet are once more filling with outwash. Uplift from ice unloading is known to be in the order of 3.5 cm/yr. Ice movement directions that can be plotted from ground observations (such as striae and crag-and-tail features) and from the study of aerial photographs, show that ice advanced down Muir Inlet from north to south. From old photographs, it has been determined that between 1890 and 1892 the McBride Remnant area was still covered by nearly 600 meters of ice. Ice continued to downwaste and retreat from 1892 to 1948. From 1948 to 1963, the rate of ice downwasting in the McBride Remnant region averaged 6.6 meters per year. Old photographs show a succession of old marginal drainage channels which can be traced across the McBride Remnant area. Smaller marginal drainage channels mark the former edges of dead ice that existed near the south end of the McBride Remnant region. Ice-cored kames and eskers are scattered throughout the McBride Remnant region. North of Nunatak Knob, crag-and-tail orientations suggest that, after separation from the Muir glacier, the McBride Remnant Glacier reversed its direction of flow. Streamlined glacial forms in the McBride Remnant area are composed of grooved till and gravel ridges and cragand-tail features. Drumlin-like forms occur near the mouth of Wachusett Inlet. Minor linear ridges crossing the McBride Remnant area were developed by filling of crevasses, till liberated from shear planes, and possible squeeze-ups into subglacial voids. A smaller network of closed or partly closed ice-disintegration ridges formed around the edges of detached, small ice blocks.