Effects of a Landslide on Sherman Glacier, Alaska 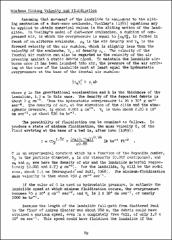 The Alaska earthquake of March 27, 1964, triggered several landslides in the Chugach Mountains of south-central Alaska. One of the largest now covers 8.5 km2, about one-third of the ablation zone of Sherman Glacier. Investigations were made in the summers of 1965, 1966, and 1967 of the mechanics of deposition of this landslide material, and the effect of the landslide on the regime of the glacier. The thickness of the rock debris is a remarkably uniform 1.3 m over most of the area of the slide. Over all of the slide area except the edges, the slide material overlies undisturbed snow that was deposited in the winter of 1963-64. These observations and many of the surface features on the slide indicate that the sliding mechanism was that of an airborne fluidized layer, in which the settling velocity was probably 340 km/hour. Before the earthquake the mass balance of the glacier was slightly negative; the glacier was receding about 25 m/year and the surface near the snout was lowering by more than 2 m/year. At that time the annual ablation over the area now covered by the slide averaged about 4 m of ice. The debris cover has reduced the annual melting to only a few centimeters and the mass balance for the two years 1964-65 and 1965-66 was positive. The exceptional weather in the 1966-67 balance year produced a strongly negative balance. The stratification of firn and ice suggests that strongly negative balance years occur about once every four years. In the three positive net balance years combined, the glacier gains about 324 x l011 g, while in the single adverse year it loses about 400 x l0ll g. If this cycle continues, even with the protective debris cover, the net mass balance of the glacier will remain negative. In the debris-free ablation zone the main sources of heat energy producing ablation are radiation, 48.4 percent, and turbulent heat transfer, 48.1 percent. The glacier is already responding to the mass gain in the ablation zone associated with the insulating debris cover. Its terminus has advanced 20 m from the summer 1966 position. Across the debris zone surface velocities increase by 25 percent toward the glacier snout. Surface strain nets also indicate that the glacier is extending and new sets of crevasses are being formed in response to the changing stress field. This increase of velocity toward the snout is not a stable situation. The glacier snout will continue to advance, possibly by about 2 km. Summer surface ice velocities on the glacier are generally larger than annual velocities. Basal sliding amounts to about 80 percent of the surface velocities; therefore, larger summer velocities are probably a reflection of changes in basal sliding produced by a water layer less than 0.5 cm thick.