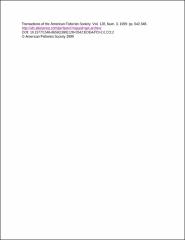 Ciereszko, A.; Dabrowski, K.; Lin, F.; Christ, S. A.; Toth, G. P. "Effects of Extenders and Time of Storage before Freezing on Motility and Fertilization of Cryopreserved Muskellunge Spermatozoa," Transactions of the American Fisheries Society, v. 128, no. 3, 1999, pp. 542-548.

The usefulness of five extenders for cryopreservation of muskellunge semen was studied in fertilization trials and computer-assisted semen analysis (CASA) of postthaw sperm motility. The effect of prefreezing storage time before cryopreservation on success of cryopreservation was also analyzed. A 50% fertilization rate (compared with fresh semen) of the extender containing 10% dimethyl sulfoxide (DMSO) in seminal-plasma-mimicking medium (SPMM) supplemented by 10% egg yolk was significantly higher than in extenders consisting of 10% DMSO, 0.6 M sucrose, and 10% egg yolk or 20% glycerol and 0.3 M glucose. Spermatozoa cryopreserved with DMSO–SPMM–egg yolk extender had the highest values of straight-line velocity and linearity of movement. Significantly lower fertilizing ability and curvilinear velocity were found for semen specimens stored on ice for 5 h before freezing compared with specimens stored for 1 h. Although spermatozoa cryopreserved with extender containing 10% methanol had only traces of motility or no motility at all after thawing, fertilization trials indicated that their fertilizing ability was preserved. Despite a lack of motility after thawing, these spermatozoa could have been activated by egg components, thus indicating that they could have been motile during fertilization. This possibility suggests that the motility pattern of muskellunge spermatozoa may be influenced during fertilization by egg components.

Funding for this project was provided by Federal Aid in Sport Fish Restoration, project F-69-P (Fish Management in Ohio), which is administered jointly by the U.S. Fish and Wildlife Service and the Ohio Division of Wildlife.