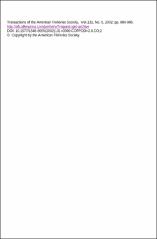 To evaluate the performance and quality of triploid saugeyes (female walleye Stizostedion vitreum x male sauger S. canadense), we compared their foraging behavior with that of diploid conspecifics. Triploidy was induced by heat-shocking fertilized eggs for 15 min at 31°C 5 min after fertilization, and ploidy was evaluated by flow cytometry. In three experiments using both ploidy groups we evaluated (1) prey selection with respect to fathead minnow Pimephales promelas and the daphnia Daphnia pulex; (2) aggression and food consumption by individual saugeye predators during a single feeding session; and (3) handling time of a single large (50–60% of predator body length) minnow. Juvenile diploid saugeyes foraged more successfully than triploid conspecifics. Diploids caught fathead minnow significantly more frequently than did triploid fish (59% and 39% of available minnow, respectively) while consuming significantly fewer daphnids. Triploids fed on zooplankton to a larger extent. Experiment 2 revealed that diploid and triploid fish did not differ in the number of prey captured up to the satiation level. However, the number of attempted attacks (20.2 ± 5.8 [mean ± SD] versus 29.3 ± 7.3 per predator per feeding session) and the percentage of unsuccessful ones (48 ± 13.5% versus 62.3 ± 9.4%) were always higher in triploids. As a consequence, the time needed to reach satiation was also longer for triploids. Diploid saugeyes had to make significantly fewer attacks for a successful catch and needed less time to handle the prey once it was captured. Thus, triploid juvenile saugeyes exhibited less efficient foraging than did diploids, which could reduce the former’s growth, increase their risk of predation, and decrease their survival after stocking.

Funding for this project was provided by the U.S. Agency for International Development, Washington, D.C. (Grant DHR-5600-G-00-1045-00) and the Ohio Division of Wildlife, Columbus.