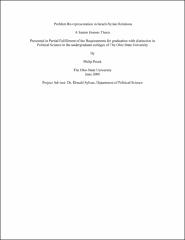 Although tension and conflict between Israel and Syria are nothing new, the past decade has seen numerous important shifts in the details of their relationship. Billings and Hermann (1998) have argued that one of the possible factors underlying such shifts can be re-representation of the problem by one or both parties to a conflict. This project seeks to determine whether the events of this period have lead to one or both sides re-representing the fundamental problems which they face as described by Billings and Hermann. Further, this thesis examines whether likely instances of such re-representation correlate with measurable changes in cooperation between the two sides.