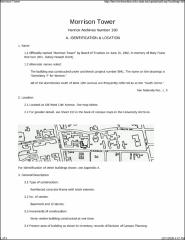 Morrison Tower is located at 196 West 11th Avenue. Officially named "Morrison Tower" by Board of Trustees on June 15, 1962, in memory of Mary Franc Morrison (Mrs. Sidney Howell Short). The building was constructed under architect's project number 5941. The name on the drawings is "Dormitory 'F' for Women." All of the dormitories south of West 12th Avenue are frequently referred to as the "South Dorms." This building is now carried in Campus Planning records as May Frank Morrison Tower. The official name remains "Morrison Tower."