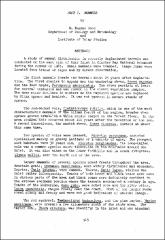 The origin of the materials on which soils and ecosystems have developed in the 25-kilometer-long triangular lowland of Muir Inlet north of Mts. Wright and Case involves the last two glacial invasions and pro-glacial waters since 8,500 B. C. The lowest unit, which is rarely seen, consists of gray marine clay full of-shells more than 10,000 years old; this is the Forest Creek clay. It represents a mid-Wisconsin (or pre-Wisconsin?) sea at least 65 meters (200 feet) above the present bay. At 11 localities, the lower of two tills lies on bedrock, or on these marine clays; it is a compact sandy loam, stained yellow to orange near its surface, and bracketed by stumps and logs which date from 8,000 to 5,100 B. C. For more than 2,300 years of Hypsithermal time retracted glaciers filled all the side -valleys with outwash (Van Horn gravels) at 1 to 2 meters per century and the forests these gravels buried were just like climax forests today. Apparently, northwestern Glacier Bay (to Reid Inlet) had ice, and no forests. The early Neoglacial advance by 2,800 to 2,200 B. C. came from this west side and blocked the Muir Inlet area, for widespread rhythmite clays cover the gravel and bedrock even up to 270 meters (900 feet). The lake lasted 2,000 years until deposition of upper Van Horn gravels, dipping gray outwash layers, killed trees between 400 B. C. and 300 A. D. Neoglacial (Glacier Bay) till covers everything. The first stumps annihilated by this ice were on higher slopes to the northwest (800 B.C.) then to the north ~100 B. C.) and finally to the south (500 A. D.). At the climax of this Little Ice Age it covered mountains like Red Mt., 1250 meters (4,100 feet), and lay at 800 meters (2,600 feet) against the slopes of Mt. Wright, with a terminal moraine along Bartlett Cove about 1700 A. D. From this slowly gained advance position there has been phenomenal retreat. Ice thinned near the edge at rates generally from 3 to 12 meters per year. The sea ice cliff probably calved back to Beartrack Cove by 1780 A. D., to Sandy Cove by 1830 A. D. and up Muir Inlet to its first mapped positions west of Mt. Wright in the 1880's and 1890's. In broader stretches, recession of 300 to 600 meters per year took place, well charted after 1892; in narrow parts of Muir Inlet 150 to 300 meters per year with two 3-year halts. The triangular lowland area invaded by plants and animals first appeared as nunatak knobs (Klotz Hills 1892, the Nunatak 1911), then as belts of new lowland 30 to 150 meters wide each year, and concentric to still-active side glaciers or to stagnant residual ice masses (Adams Inlet to 1935; McBride Remnant to 1966). Gently sloping channels, floored with recent Seal River outwash gravels, became available some decades after the ice left, as floodwaters ceased in each route. Shores are emerging at over 4 centimeters per year as the great ice load is removed from the land, so the shore environment area has widened several meters each century. These are the rates at which new land became available to plants, animals, and soil-forming processes.

Second printing of this report, June 1974.
The University Archives has determined that this item is of continuing value to OSU's history.