An Application of the Contact Hypothesis in a Middle School Setting 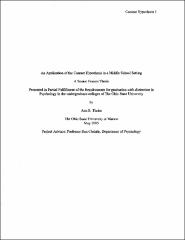 The contact hypothesis, proposed by Gordon Allport (1954), maintains that prejudice and discrimination between conflicting groups can be reduced if the groups are brought together in a situation of positive interdependence with a common goal. The current research consists of four studies based on the contact hypothesis in which groups in conflict worked together to write and produce a play on stereotypes and prejudice. The first study determined fault lines that divide students at Grant Middle School in Marion, Ohio. A total of 475 sixth through eighth grade students identified 12 groups (e.g., preps, jocks, etc.). The reliability of the categories of social groups was checked by two judges who independently sorted a random sample of 100 student lists. The agreement between judges was 86.5 percent. In study 2, 34 core group members who were nominated by three school counselors were administered an inventory that consisted of five scales designed to assess intergroup relations. Three of the scales did not have inter-item consistency and therefore were revised. In study 3, 26 of the 34 nominated students filled out the revised version of the inventory. Cronbach’s alpha indicated that all of the scales had items that were internally consistent. In addition, the inter-correlations among the scales indicated construct validity for the inventory. In study 4, students who participated in Study 3 completed their scripts and began rehearsing the play. The inventory for Study 3 was re-administered (posttest) and compared to the pretest scores of Study 3. No significant changes in intergroup relations were obtained. Limitations of the present research are discussed in light of previous research on the contact hypothesis.