Bluegill growth as modified by plant density: an exploration of underlying mechanisms 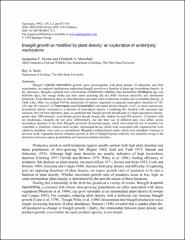 Bluegill (Lepomis macrochira) growth varies inconsistently with plant density. In laboratory and field experiments, we explored mechanisms underlying bluegill growth as a function of plant and invertebrate density. In the laboratory, bluegills captured more chironomid (Chironomus riparius) than damselflies (Enallagma spp. and Ischnura spp.), but energy intake per time spent searching did not differ between damselfly and chironomid treatments. From laboratory data, we described prey encounter rates as functions of plant and invertebrate density. In Clark Lake, Ohio, we created 0.05-ha mesocosms of inshore vegetation to generate macrophyte densities of 125, 270, and 385 stems/m2 of Potamogeton and Ceratophyllum and added 46-mm bluegill (1/m2). In these mesocosms, invertebrate density increased as a function of macrophyte density. Combining this function with encounter rate functions derived from laboratory data, we predicted that bluegill growth should peak at a high macrophyte density, greater than 1000 stems/m2, even though growth should change only slightly beyond 100 stems/m2. Consistent with our predictions, bluegills did not grow differentially, nor did their use of different prey taxa differ, across macrophyte densities in the field. Bluegills preferred chironomid pupae, which were relatively few in numbers but vulnerable to predation, whereas more cryptic, chironomid larvae, which were associated with vegetation but were relatively abundant, were eaten as encountered. Bluegills avoided physid snails, which were abundant. Contrary to previous work, vegetation did not influence growth or diet of bluegill beyond relatively low densities owing to the interaction between capture probabilities and macroinvertebrate densities.

Funding for this project was provided by Dingell-Johnson project F-57-R administered through the Ohio Division of Wildlife.