Food-web regulation by a planktivore: exploring the generality of the trophic cascade hypothesis 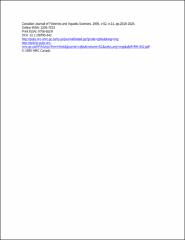 The trophic cascade hypothesis currently being tested in north temperate systems may not apply to open-water communities in lower latitude U.S. reservoirs. These reservoir communities differ dramatically from northern lakes in that an open-water omnivore, gizzard shad (Dorosoma cepedianum), often occurs in abundance. Neither controlled by fish predators (owing to high fecundity and low vulnerability) nor by their zooplankton prey (following the midsummer zooplankton decline, gizzard shad consume detritus and phytoplankton), gizzard shad regulate community composition rather than being regulated by top-down or bottom-up forces. In experiments across a range of spatial scales (enclosures, 1-9 m2; ponds, 4-5 ha; and reservoirs, 50-100 ha), we evaluated the generality of the trophic cascade hypothesis by assessing its conceptual strength in reservoir food webs. We reviewed the role of gizzard shad in controlling zooplankton populations and hence recruitment of bluegill, Lepomis macrochirus (via exploitative competition for zooplankton), and largemouth bass, Micropterus salmoides (by reducing their bluegill prey). Reservoir fish communities, owing to the presence of gizzard shad, appear to be regulated more by complex weblike interactions among species than by the more chainlike interactions characteristic of the trophic cascade.