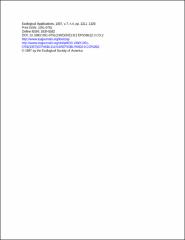 Though young-of-year (YOY) saugeyes (Stizostedion vitreum 3 S. canadense) are routinely stocked in spring to create and maintain percid fisheries, their growth and survival to fall vary greatly among Ohio reservoirs, as well as among years within a reservoir. To understand the relative importance of size-dependent and size independent mechanisms during ontogeny that underlie variable stocking success of saugeye, we quantified the role of stocking date and prey density (zooplankton and ichthyoplankton, i.e., larval gizzard shad [Dorosoma cepedianum]) in field enclosure, pond, and reservoir experiments. In 1-m3 enclosures, ichthyoplankton density (0, 5, 10, or 20 larval gizzard shad/m3) did not influence time to switch to piscivory by saugeye (all switched in <12 h); saugeye in enclosures with ichthyoplankton, regardless of density, grew faster than those without ichthyoplankton. In 0.4-ha ponds, saugeye growth and survival did not differ between ponds with zooplankton plus macrobenthic prey and ponds with those prey plus small ichthyoplankton (<10 mm). In reservoir experiments, we evaluated how time in reservoirs, zooplankton density, and peak density (as well as date) of ichthyoplankton influenced saugeye growth and survival during 1991–1994 (N = 31 reservoir-years). In 1993, we attempted to bracket the ichthyoplankton peak in five Ohio reservoirs by stocking two genetically identifiable cohorts of saugeye 2 wk apart in spring. For all reservoirs, those saugeye stocked before the ichthyoplankton peak grew larger than those stocked after the ichthyoplankton peak by 1 October. In 1994, we hypothesized that saugeye might overexploit local populations of ichthyoplankton when stocked at a single site. We paired 10 reservoirs (N = 5 pairs) with one reservoir of each pair scatter-stocked (i.e., saugeye numbers equally divided among five sites) and the second point stocked (i.e., at a single site). Stocking method did not influence saugeye survival; late gizzard shad spawning, coupled with low larval densities, yielded poor saugeye survival in 1994. However, YOY saugeye were considerably larger in fall 1994 than in fall 1993, when gizzard shad appeared earlier and produced more larvae. Zooplankton density at stocking influenced neither growth nor survival. Increased time in reservoirs increased fall size but did not influence survival. Although saugeye growth and survival during their first year were unrelated, both measures of stocking success critically depended on gizzard shad availability. Across all years, saugeyes stocked before ichthyoplankton peaks were large (as a result of their ability to consume fast-growing gizzard shad through summer), but survived poorly to fall (perhaps owing to early, high predatory mortality). Conversely, saugeyes stocked after ichthyoplankton peaks were small in fall (for they were unable to exploit large gizzard shad) but survived better (perhaps because gizzard shad provided a predatory buffer). By manipulating stock date relative to ichthyoplankton peaks, fisheries managers can either increase saugeye size or survival to fall, but not both.

Funding for this project was provided by the Federal Aid in Sport Fish Restoration Program (F-69-P, Evaluation of Fish Management Techniques), administered jointly by the U.S. Fish and Wildlife Service and the Ohio Division of Wildlife.