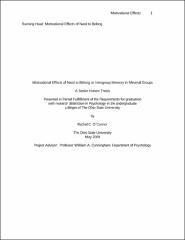 Recent research has shown that assigning participants to novel mixed-race groups can eliminate racial bias by shifting identity and affiliation goals to the novel in-group rather than racial group. People make judgments about other people based on the novel in-group rather than the racial group. This research makes the assumption that these results occur because the new group is more motivationally relevant to participants in that moment. Yet, this important assumption has never been directly tested. The current research explores how people prioritize multiple group memberships and what effects these prioritizations have on intergroup bias by exploring a key motivational factor, the need to belong. Research on the need to belong has shown that when a person is ostracized by others, they will be motivated to affiliate more strongly with in-group members. In the study, participants were randomly assigned to write one of three paragraphs about a time they felt included, a time they felt excluded, or a neutral control condition. They were then randomly assigned to one of two teams and learned about faces from both teams. Finally, participants completed a face recognition task. Subjects were undergraduate students at Ohio State who completed the experiment in partial fulfillment of class requirements. We found that participants who were made to feel excluded and then assigned to a novel team showed the greatest affiliation with their new in-group, expressing greater memory for members of their in-group. This project expands Social Identity Theory, Self-Categorization Theory, and Multiple Categorization Theory by showing that a person’s need to belong is an important factor in determining how a person will sort their group memberships. People who are ostracized may find it even more necessary than usual to try and fit in with a wider-range of people by re-defining their social identity. This research is important to understanding prejudice and discrimination that can occur in intergroup interactions by explaining how social motivations can change the way a multiply-categorizable person is perceived.