Empire at End: Global Transformations in the Late Cold War 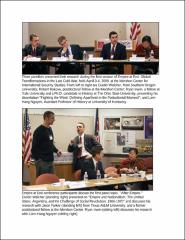 Empire at End: Global Transformations in the Late Cold War is the third conference on global history at the Mershon Center for International Security Studies. This symposium brings together junior faculty and advanced Ph.D. candidates to examine the patterns, limits, and agents of global change in late 20th century. Panelists will consider to what extent, and for what reasons, the bipolar balance of power that characterized the Cold War was challenged, particularly from the 1970s on. By examining the interplay of new forces for change with forces resisting change, we hope to better understand the relationships between the global transformations of the late 20th century and pan-European Empire. Did these transformations mark the "End of Empire" or merely redefine empire? Students of diplomatic, international, and transnational history, along with economists, political scientists, and specialists in globalization, are encouraged to attend Empire at End. The conference will examine themes of globalization and nationalism, as well as warfare, social protest, and political economy. Its geographical scope will be broad, focusing not only on the United States and the Soviet Union, but also Western and Eastern Europe, East and South Asia, Latin America, and Africa.