The Race in Culture: 20th-Century Ethnology and Empire in Comparative Perspective 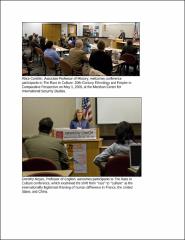 Keywords of the modern period, "race" and "culture" have persisted as concepts shaping both institutional and vernacular practice. The imperialist context in which scientific representations of human difference emerged has been intensively studied. The Race in Culture: 20th-Century Ethnology and Empire in Comparative Perspective examines the persistence of such representations in post-imperial states and international institutions. We compare the 20th century trajectories of three states torn among nationalist, imperialist, and universalist aspirations: France, the United States, and China. The conference will have two principal foci. First we examine ethnological museums, their original importance as knowledge institutions, and their contested roles today as vehicles for promoting cultural diversity. Second, we consider how, in the wake of the Holocaust and the breakup of European empires after the Second World War, earlier concepts were reconfigured rather than erased. An overall shift from "race" to "culture" as the internationally legitimate framing of human difference can conveniently be dated to the 1950 UNESCO Declaration on Race. Nonetheless, continuities as well as ruptures can be traced in many realms of policy and administration.