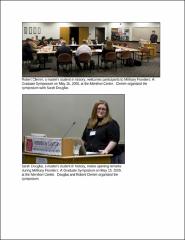 Military Frontiers: A Graduate Symposium brings together leading graduate students engaged in national academic debate within military history. The conference seeks to revive discussions of the successful "Theatrum Militarum" graduate conference held at Ohio State in the 1990s. This year, discussion will focus on issues raised by emerging scholars of the "Great War." Panelists will present on the role the United States played in providing humanitarian relief from 1914-1924 in response to war sufferings, the American military identity as presented in uncensored war testimonies gathered during the Great War, and the impact of changing military technology on leadership development of the United States military during the 20th century. Students of military and diplomatic history, and specialists in military studies, are encouraged to attend Military Frontiers. The symposium will examine themes on ethical and legal issues of armed conflict; ways in which war affects and is affected by race and gender; and links between war, science, and technology.