The 18th Knesset: Obama, Netanyahu, and the Future of the U.S.-Israel Relationship 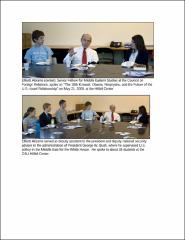