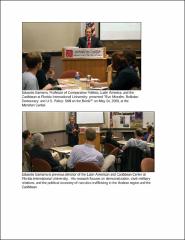 Eduardo Gamarra is Professor of Comparative Politics, Latin America, and the Caribbean, as well as previous director of the Latin American and Caribbean Center at Florida International University. His research focuses on democratization, civil-military relations, and the political economy of narcotics trafficking in the Andean region and the Caribbean. He is currently studying U.S. policy toward Colombia and the migration of Colombians to the United States. Author of more than 40 articles and several books, Gamarra is co-author or editor of Revolution and Reaction: Bolivia 1964-1985 (Transaction Publishers, 1988), Latin American Political Economy in the Age of Neoliberal Reform (Lynne Rienner Publishers, 1994), Democracy Markets and Structural Reform in Latin America: Argentina, Bolivia, Brazil, Chile, and Mexico (Lynne Rienner Publishers, 1995), and Entre la Droga y la Democracia (Freiderich Ebert Foundation, 1994). Over the course of the last 15 years, Gamarra has offered consultation on Latin American issues to the Library of Congress and other governmental organizations. He has been cited for his expertise on Bolivia and other Latin American countries in The New York Times, The Washington Post, and The Wall Street Journal, El Tiempo de Bogota, El Mercurio de Chile, and La Razon de La Paz, Bolivia.