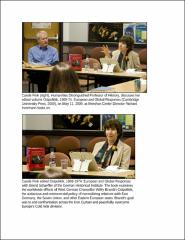 Fink will be speaking about her most recent book, Ostpolitik, 1969-1974: European and Global Responses (Cambridge University Press, 2009), edited with Bernd Schaeffer. The book examines the worldwide effects of West German Chancellor Willy Brandt's Ostpolitik, the audacious and controversial policy of normalizing relations with East Germany, the Soviet Union, and other Eastern European states. Brandt's goal was to end confrontation across the Iron Curtain and peacefully overcome Europe's Cold War division. Ostpolitik paralleled but also diverged from the U.S. détente, contributed to easing tensions in Europe, and ultimately led to the end of division in Germany and Europe. It also stimulated hopes and fears in places such as India, Korea, China, and South Africa for similar models of rapprochement with the enemy. The book is the product of a 2006 conference sponsored by the Mershon Center and German Historical Institute.