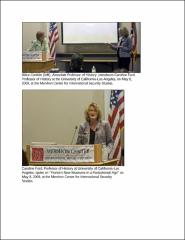 Caroline Ford is Professor of History at University of California at Los Angeles, where she teaches on modern France, French colonialism and the Algerian war, religion and nationalism, modern European History, and European landscape and environmental history in comparative perspective. Ford completed her Ph.D. in European history at the University of Chicago and taught at Harvard University and University of British Columbia in Vancouver before joining UCLA in 2004. Her first book, Creating the Nation in Provincial France: Religion and Political Identity in Brittany (Princeton University Press, 1993) explores religion, nation formation, and the creation of regional and religious identities in France at the beginning of the 20th century. Her second book, Divided Houses: Religion and Gender in Modern France (Cornell University Press, 2005), focuses on the feminization of religion in postrevolutionary France and its impact on the civil/political status of women and the creation of a distinctive laïc republican political culture by the early 20th century. It concludes with current debates over the veiling of Muslim women in the late 20th century. She is currently writing a book on the transformation of environmental sensibilities in France between 1840 and 1940, which will be published by Harvard University Press as Nature and Artifice: Culture and Conservation in Metropolitan and Colonial France. She is also co-editor, with Tamara Whited, of a special issue of French Historical Studies on new work in French environmental history. She ultimately plans to write a book on Islam in France after 1945. Ford is also working on a project regarding "new" postcolonial museums and French colonial memory, from which this lecture is derived.