The Politics of Deliberation: Qat Chews as Public Spheres in Yemen 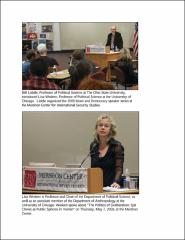 isa Wedeen is Professor and Chair of the Department of Political Science, as well as an associate member of the Department of Anthropology at the University of Chicago. Her research interests include comparative politics, the Middle East, political theory, and feminist theory. In addition to teaching on the Middle East, Wedeen teaches courses on nationalism, comparative identity formation, power and resistance, and citizenship. She is author of numerous articles and two books, Ambiguities of Domination: Politics, Rhetoric, and Symbols in Contemporary Syria (University of Chicago Press, 1999) and Peripheral Visions: Publics, Power and Performance in Yemen (University of Chicago Press, 2008). In Peripheral Visions, Wedeen draws on 18 months of field experience in Yemen. She analyzes the development of national attachments in an environment with weak state institutions. Through her fieldwork, Wedeen has found that much of public life in Yemen revolves around qat, a leafy stimulant typically chewed during afternoon socializing. Qat chews foster a wide range of discussions and interactions among community members, as well as strangers, including intense debates of primarily political issues. By analyzing these informal gatherings, Wedeen reveals how the study of public discussions, existing outside of official electoral or governmental institutions, provides insight into the development of participatory politics.