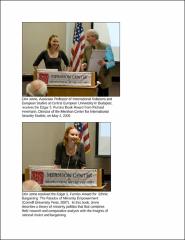 Erin K. Jenne is Associate Professor of International Relations and European Studies at Central European University in Budapest. She teaches on the subjects of nationalism and civil warfare, international relations, qualitative methods and research design, and ethnic conflict in Eastern Europe. Jenne's first book, Ethnic Bargaining: The Paradox of Minority Empowerment (Cornell University Press, 2007), received the Edgar S. Furniss Award. In this book, Jenne describes a theory of minority politics that that combines field research and comparative analysis with the insights of rational choice and bargaining. She builds her theory from research completed in the post-communist countries of East Central Europe. Jenne's work focuses on ethnic cleavage in the cases of Sudeten Germans in interwar Czechoslovakia; Slovaks and Moravians in post-communist Czechoslovakia; the Hungarians in Romania, Slovakia, and Vojvodina; and the Albanians in Kosovo. Jenne finds that even though nation-states have been, on average, more responsive to minority groups than in earlier years, claims by ethnic minorities have become more frequent since 1945. She argues that minorities who perceive an increase in their bargaining power will tend to radicalize their demands. Outlining the procession from affirmative action to regional autonomy to secession, Jenne describes the efforts of minority groups to attract ever greater concessions from their respective central governments.