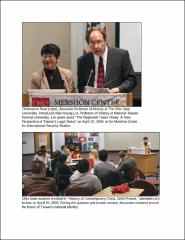 Man-houng Lin has been a Senior Research Fellow at the Institute of Modern History, Academia Sinica since 1990 and Professor of History at National Taiwan Normal University since 1991. In 2008, she was named president of Taiwan's Academia Historica, or State History Academy. Lin's main area of research focuses on treaty ports and modern China, native opium of late Qing China, currency crisis and early 19th century China, various empires and Taiwanese merchants' Great East Asian overseas economic networks, 1860-1961. She has published five books and about 70 papers in Chinese, English, Japanese and Korean in these areas. Her book, China Upside Down: Currency, Society and Ideologies, 1808-1856 (Harvard East Asian Series, 2006) links China's topsy-turvy change from the center of the East Asian order to its modern tragedy with the Latin American Independence Movement. Lin was mostly educated in Taiwan and received her Ph.D. in History and East Asian Languages from Harvard University in 1989.