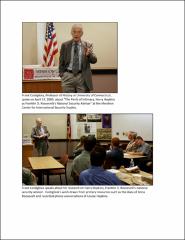 Frank Costigliola is Professor of History at the University of Connecticut specializing in 20th century U.S. history and U.S. foreign relations. His recent publications include "Broken Circle: The Isolation of Franklin D. Roosevelt in World War II" (Diplomatic History, November 2008); "Reading for Meaning: Theory, Language, and Metaphor" in Explaining American Foreign Relations History, 2nd ed., ed. by Michael Hogan and Thomas G. Paterson (Cambridge University Press, 2003); and "'I Had Come as a Friend': Emotion, Culture, and Ambiguity in the Formation of the Cold War" (Cold War History, August 2000). Costigliola is currently writing a book called Lost Alliances: How Personal Politics Helped Win World War II and Form the Cold War, about the impact of emotions and perceived cultural differences in the shaping of U.S., British, and Soviet foreign policy during and immediately after World War II. He has received fellowships from the Guggenheim Foundation, National Endowment for the Humanities, and Nobel Institute. In 2009 he started a term as president of the Society for Historians of American Foreign Relations.