Electoral Observation: A Tool for Democratization and Peace in Latin America 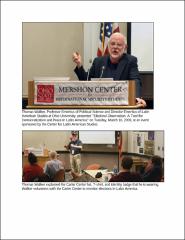 Formal electoral observation by credentialed international groups began in Latin America with the controversial but clean Nicaraguan election of 1984. Conducted by a number of credible groups -- ranging from the British Parliament and House of Lords to the Latin American Studies Association -- the results of these efforts were, nevertheless, studiously ignored by the mainstream press in the United States. Since then, many dozens of elections in the region have undergone close international scrutiny, more sophisticated technology of observation has been developed, and new entities -- such as the Carter Center, the Organization of American States and the United Nations -- have become involved. Now, international observation can no longer be ignored even in the United States and even when U.S. "enemies" such as Hugo Chavez and Daniel Ortega (the clear winner in 1984, and now 2006) are the victors. In addition to keeping the record straight throughout the world, international observation serves to reassure voters that the world is watching and to preserve peace throughout and following tense electoral contests. Thomas Walker, who was an observer with LASA in Nicaragua in 1984, 1990, and 1996, also observed for the Carter Center in Venezuela in 2004 and Nicaragua in 2006. He will discuss the evolving role, techniques, and importance of international electoral observation in Latin America from 1984 to the present.