A Political-Institutional Model of Real Exchange Rates, Competitiveness, and Division of Labor 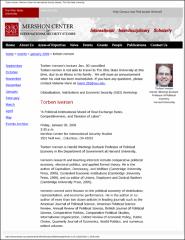