The Political Economy of Exchange Rate Regimes In Transition Economies 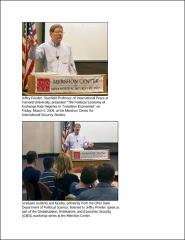 Jeffry Frieden is Stanfield Professor of International Peace at Harvard University. He specializes in the politics of international monetary and financial relations. Frieden's most recent book is Global Capitalism: Its Fall and Rise in the Twentieth Century (W.W. Norton, 2006). In this publication, he describes key economic and political events that shaped the global economy during the last century. The New York Times Book Review described Frieden's work as "one of the most comprehensive histories of modern capitalism yet written." Frieden is also the author of Debt, Development, and Democracy: Modern Political Economy and Latin America, 1965-1985 (Princeton University Press, 1991), and Banking on the World: The Politics of American International Finance (Harper and Row, 1987). Among other publications, he is the coeditor with Ernesto Stein of Currency Games: Exchange Rate Politics in Latin America (John Hopkins University Press, 2001), with David Lake of International Political Economy: Perspectives on Global Power and Wealth (4th ed., St. Martin's Press, 2000), and with Barry Eichengreen of Forging an Integrated Europe (University of Michigan Press, 1998). Frieden is co-chair of the Research Group on Political Institutions and Economic Policy at Harvard University. He is on the steering committee for the International Political Economy Society and will be Chair of the Political Economy Section of the American Political Science Association until the end of 2008.