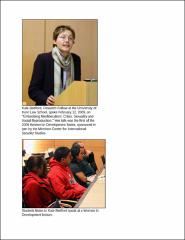 This talk seeks to intervene in a vibrant and publicly prominent debate within development studies about the role of crisis in "postneoliberal" or post-Washington Consensus policy making. Gender and, especially, sexuality are largely absent from that debate. I ask: What do contemporary experiences of crisis reveal about the complex interconnections between rupture and shock on one hand, and gender and sexuality on the other? In concrete crisis conditions, which common sense groundworks of the present get unsettled, which get re-entrenched, and what is the role of the development industry in this process? Specifically, I ask how possibilities for alternative regimes of gender and sexuality are affected by economic crisis, using a case study of the World Bank's response to the 2001-02 Argentine crisis. Using interviews with NGOs and World Bank policy makers, and fieldwork on a family-strengthening loan called PROFAM, I argue that the denaturalization of free markets was articulated, in part, through the re-naturalization of monogamous heterosexual couplehood.